Terpene synthases convert a prenyl diphosphate of a specific chain length to the first pathway-specific cyclic or acyclic intermediate in the biosynthesis of each class of terpenoids.  While some terpene synthases are remarkably specific and only generate one product from a prenyl diphosphate precursor, others release a larger number of products from a common substrate, thus contributing to terpenoid chemical diversity. We are using integrative approaches that involve sequence comparisons, extensive mutation screens and molecular dynamics simulations to explore how spatial and electrostatic constraints determine specificity.

Essential oils obtained from the genus Mentha contain mixtures of terpenoids whose composition is dependent on species. The biosynthesis of these terpenoids involved enzymes that catalyze functionalization reactions,  such as oxidations, reductions, and isomerizations, thus generating chemical diversity.  We use genomics, transcriptomics, in vitro assays and structural modeling approaches to assess the functions of enzyme candidates.

Acyl-activating enzymes catalyze the formation of coenzyme A (CoA) thioesters by activating carboxylic acids by a two-step process. We have previously characterized CoA ligase candidate genes that are relevant to the N-substitution of the phenylisoserine side chains of paclitaxel (Taxol®) and its analogs. Current work is focused on investigating structural factors that play roles in substrate specificity of a wide range of acyl activating enzymes. 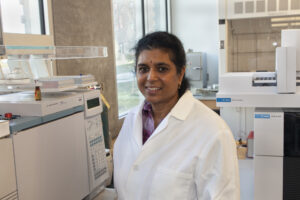