My laboratory is trying to understand the symbiosis between nitrogen-fixing Rhizobium bacteria and legumes at a molecular and a metabolic level. In the symbiosis, nitrogen reduced to ammonium by the bacteria is exchanged for carbon compounds produced by the plant. This allows each organism to benefit from the unique metabolic abilities of the other and provides a considerable selective advantage to both. We work primarily in two areas of metabolism, the synthesis and degradation of carbon compounds through the TCA cycle and the synthesis and degradation of amino acids that are derived from this cycle. One of the outstanding problems in the field is to understand why the bacteria release reduced nitrogen to their plant host. Nitrogen fixation is an extraordinarily expensive reaction and is usually under tight control. But in symbiosis the bacteria reduce much more nitrogen than they need and the reasons for this are not clear. We have been studying how the plant feeds the bacteria and how the bacteria generate the reductant and ATP needed for fixation.

Projects currently being worked on in the laboratory give some of the flavor of our approach: Using site-specific and nutritionally selected mutants we are trying to distinguish which of several potential substrates and products are important in fixation; we are characterizing proteins we believe are part of a nitrogenase-specific electron transport system; and we are developing temperature-sensitive mutants to probe how particular enzymes are coupled to symbiotic nitrogen fixation. In addition, we are developing new methods for detecting the contribution of associative or symbiotic nitrogen fixation to host-plant nutrition. 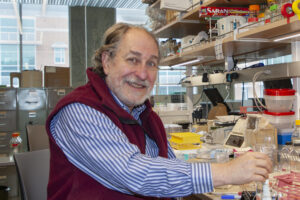