Access to fixed or available forms of nitrogen limits the productivity of crop plants and thus food production. Nitrogenous fertilizer production currently represents a significant expense for the efficient growth of various crops in the developed world. There are significant potential gains to be had from reducing dependence on nitrogenous fertilizers in agriculture in the developed world and in developing countries, and there is significant interest in research on biological nitrogen fixation and prospects for increasing its importance in an agricultural setting. Biological nitrogen fixation is the conversion of atmospheric N2 to NH3, a form that can be used by plants. However, the process is restricted to bacteria and archaea and does not occur in eukaryotes. Symbiotic nitrogen fixation is part of a mutualistic relationship in which plants provide a niche and fixed carbon to bacteria in exchange for fixed nitrogen. This process is restricted mainly to legumes in agricultural systems, and there is considerable interest in exploring whether similar symbioses can be developed in nonlegumes, which produce the bulk of human food. 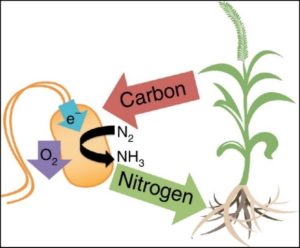 Novel convergent pathways in the model microorganism Xanthobacter autotrophicus have been described in which epoxides produced by alkene oxidation and ketones produced by the oxidation of alcohols are further carboxylated and utilized in energy yielding pathways. Both alkene/epoxide and alcohol/ketone pathways involve distinct carboxylases with unique molecular properties and cofactor requirements that represent alternative mechanisms of CO2 fixation.

The main focus and aims of the research involve providing the structural basis for the mechanistic understanding of the reactions catalyzed by 2-ketopropyl coenzyme M oxidoreductase / carboxylase and acetone carboxylase, the terminal steps in the convergent pathways of alkene/epoxide and alcohol ketone metabolism in X. autotrophicus strain Py2. Interestingly, coenzyme M (CoM), the simplest known organic coenzyme, has been shown to have a central role in the pathway of alkene/epoxide carboxylation. Prior to this discovery CoM was thought only to be involved in methanogenesis in archaea. In addition to the carboxylation mechanisms, we are examining the enzymology of the biosynthesis of CoM in bacteria and we have already determined that it is biochemically distinct from that of CoM synthesized by methanogens. The proposed studies will reveal new and unique insights into CO2 fixation pathways and carboxylation chemistry

We are utilizing a multidisciplinary approach involving kinetic studies, site-specific amino acid substitution studies, and the determination of high-resolution structures of enzymes in the presence of substrate analogs and mechanism base inhibitors to ascertain information concerning the biochemical mechanisms of enzyme catalyzed reactions. 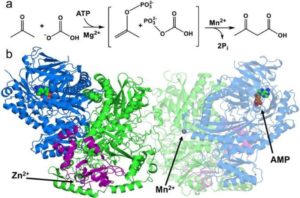 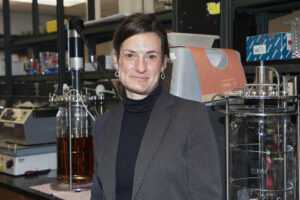